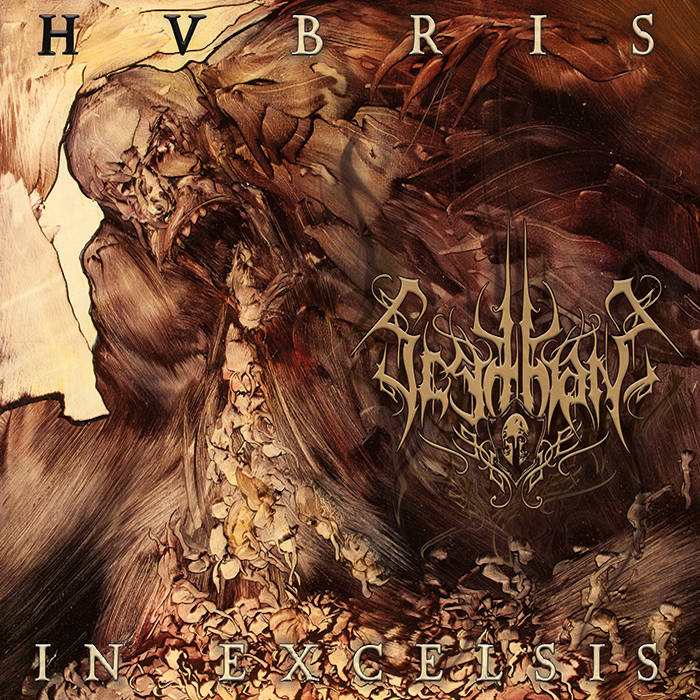 Matthew Toye Scythian are truly unique. They sound like Bathory's 'Hammerheart' and Morbid Angel had an unholy demon baby. In a genre that gets stale from time to time, this band really stands out. One of my favourite bands ever. Favorite track: Beyond The Dust.

clockhour I'm not a big fan of death metal subgenres but this album is epic! Favorite track: Apocalyptic Visions.

Sebas Q I listened to the song Hubris in Excelsis from the latest Hells Headbangers compilation and I knew this would be a killer album. I bought it yesterday and I wasn't wrong at all, such epic black thrash with sharped riffs that make you headbang like there's no tomorrow!
more...

At long last, maverick UK death metallers SCYTHIAN are set unleash a storm: Hubris in Excelsis, the band's highly anticipated second album. SCYTHIAN's first album for HELLS HEADBANGERS - and the first UK band to be signed to the label - Hubris in Excelsis marks the transformation of a little-known quartet into a serious contender.

Heavily inspired by apocalyptic science fiction, morbid poetry, and the unlikely mix of Sodom, Bathory, and Angelcorpse - or perhaps more specifically, INRI-era Sarcofago, '90s Zemial, and Desaster's Tyrants of the Netherworld - here on Hubris in Excelsis, SCYTHIAN better the bold sound & vision triumphantly displayed across their celebrated debut album, 2009's To Those Who Stand Against Us, whilst retaining the unique, charismatic core that won them favor 'n' fervor in the international metal underground. From slow-burning beginning to bloody, battle-torn end, SCYTHIAN fire off ten, total-experience epics that are as engaging and invigorating as the last: almost narrative despite the hellfire and fury with which SCYTHIAN play, yet winding through a wide range of dynamic contours and subtly dusted with tasteful nuance.

SCYTHIAN are both obedient to and defiant of metal tradition, for in their world, there are "no gods / no masters" - only the power of the will, and the iron-fisted hand that wields it. They've harnessed such a power with the aid of Esoteric's Greg Chandler, who recorded and engineered Hubris in Excelsis at his Priory Studios, with mastering by Mithras' Leon Macey at Dreaming Studios. Altogether, it's a recording rich with confidence and color, vigor and violence, sweat and celestial space. Completing the totality of Hubris in Excelsis is the cover (and interior) art painted by esteemed underground artist Blanka Dvorak, which is rich with imagery influenced by morbid, dystopian sci-fi and resonates with the album's latent lyrical themes.

From the micro to the macro, above and below and beyond, SCYTHIAN have reached a startling maturity with Hubris in Excelsis, and their coming of age begins here. Prepare for the grand reckoning as tyrants feast...

Bandcamp Daily  your guide to the world of Bandcamp